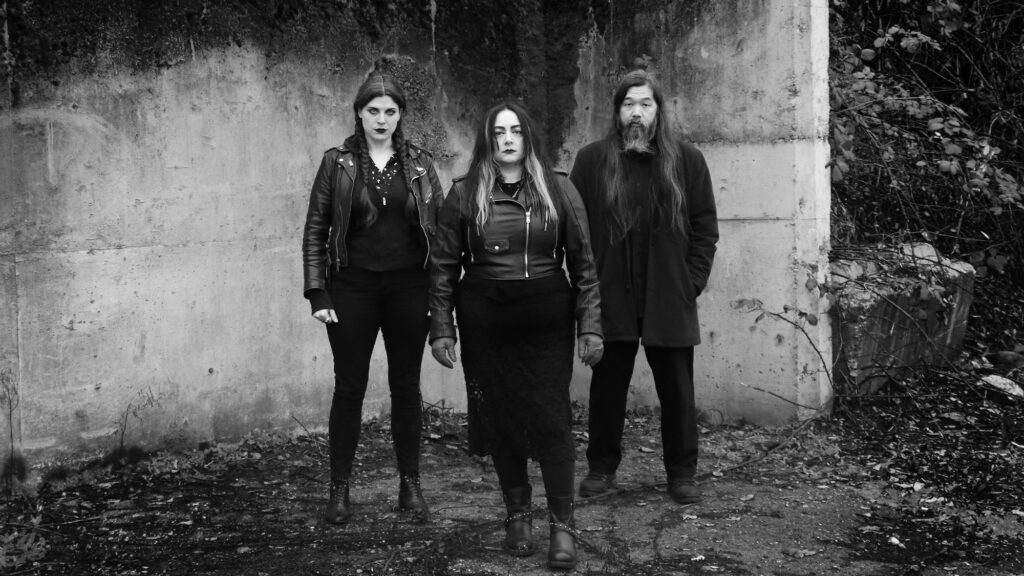 TO END IT ALL: Avant-Garde/Death Industrial trio Announces Spring Shows

Avant-garde/death industrial outfit TO END IT ALL will return to the stage this Spring. The rituals begin with a special show supporting Author & Punisher March 8th in Seattle before the band embarks on several shows spread throughout the month of April. The journey, which features a special cassette release show celebrating TO END IT ALL’s Live At Teatro De La Psychomachia / Strength Is Nothing (ft. Zvi), a partial soundtrack for Andrei Tarkovsky’s Stalker, includes performances in Olympia, Seattle, Tacoma, Eugene, Oakland, Sacramento, and Portland, with more to be announced in the months to come. The band will be joined by Butoh dancer Vanessa Skantze. See all confirmed dates below.

In 2021, the duo became a three-piece with the addition of guitarist and vocalist Anne K. O’Neill (Serpentent) to the live group. The trio has appeared at the Peace Simulation pop-up and at Teatro De La Psychomachia in Seattle. TO END IT ALL frequently collaborates with Butoh dance artist Vanessa Skantze, as well as with ritual visual artist Anima Nocturna, and film maker Joseph Seuferling to create an immersive live experience with movement, lighting, or video projections.

During the pandemic lockdowns of 2020, TO END IT ALL released a single from “Strength Is Nothing” for a planned upcoming release. This longer work was composed with Zvi (Ron Varod) to accompany part of Tarkovsky’s masterpiece film, Stalker. German label Prophecy’s luxus edition of Eye Of Nix’s Ligeia (2020) features a cover by TO END IT ALL of the track “Stranded”.

In 2018, TO END IT ALL released their full-length Scourge Of Woman on LP as a duo through Scry Recordings. The album’s death industrial, dark ambient, melodic, and noise collage structures received accolades within the post-industrial and experimental music world and press. Scourge… features photography by Anima Nocturna in collaboration with Joy Von Spain. TO END IT ALL previously released a demo tape and a tour tape in 2017. In addition to touring the US West Coast and rustbelt, TO END IT ALL has appeared at Covenant Fest (BC), Litha Cascadia Solstice, and the Cascadian Yule gathering, as well as at many other interesting and unusual shows in Seattle. 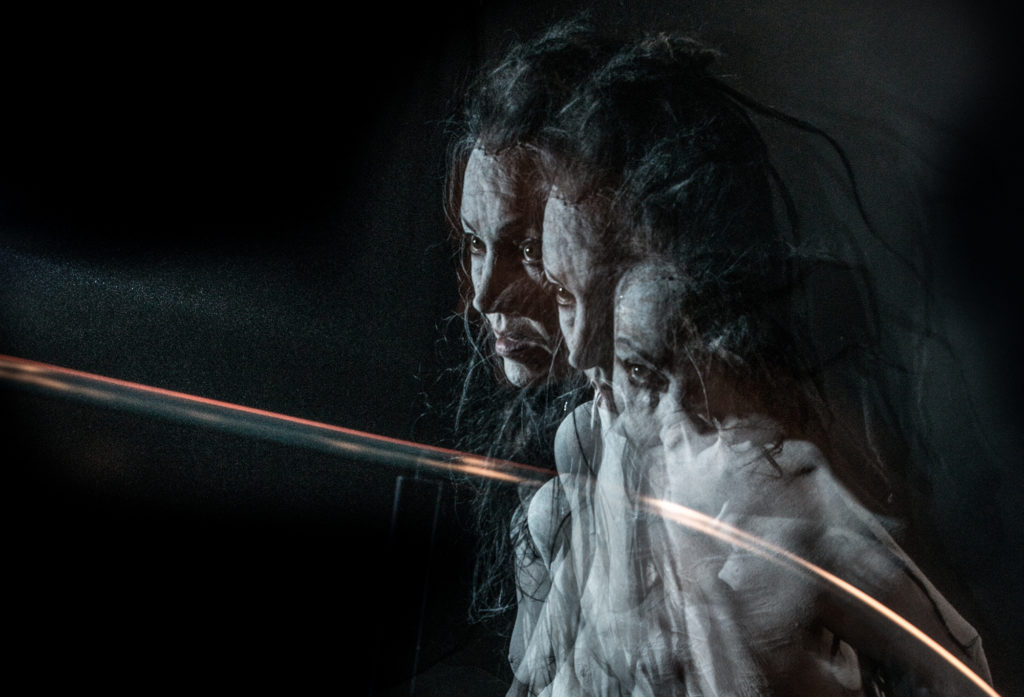 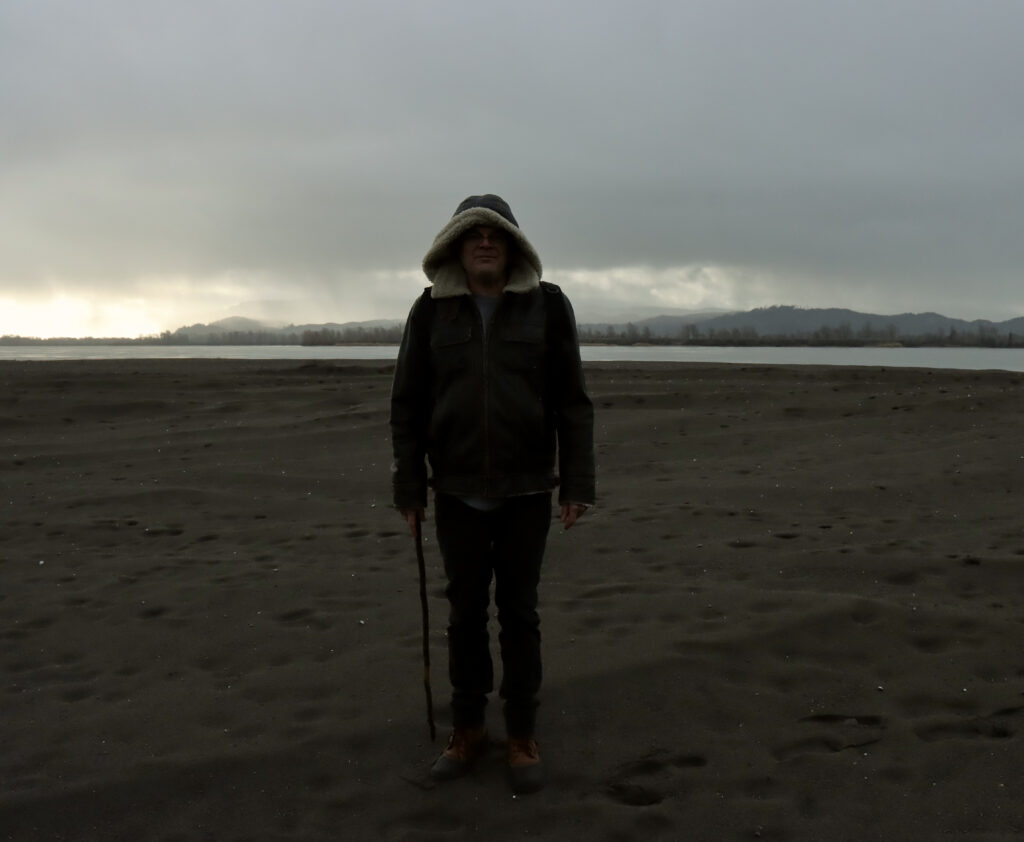 Experimental noise architect NOISEPOETNOBODY will release his latest sonic immersion with the Potential vs Eventual EP, set for release on April 15th via Scry Recordings.

For two decades, Casey Chittenden Jones has been soundtracking the collapse of civilization under the moniker NOISEPOETNOBODY, utilizing homemade instruments, synthesizers, field recordings, tape manipulation and modular equipment to create haunting, discordant, and broken sounds to express the need for creativity in a dying ecosystem.

Comments Chittenden of his latest work, “Potential vs Eventual is an assemblage of sound designed to self-procreate advances forward toward hidden demise, where interactions with machines built for human pleasure turns disastrous leaving a degrading imprint of former aspirations abandoned to soaking in a vicarious pain bath of lost ambition.”

Today Chittenden reveals “Potential vs Eventual Part 1” calling it, “A sonic tribute to that moment when life becomes an unintended outcome of regrettable consequence.”

Stream “Potential vs Eventual Part 1” at THIS LOCATION.

Potential vs Eventual will be released digitally. Find preorders at THIS LOCATION. 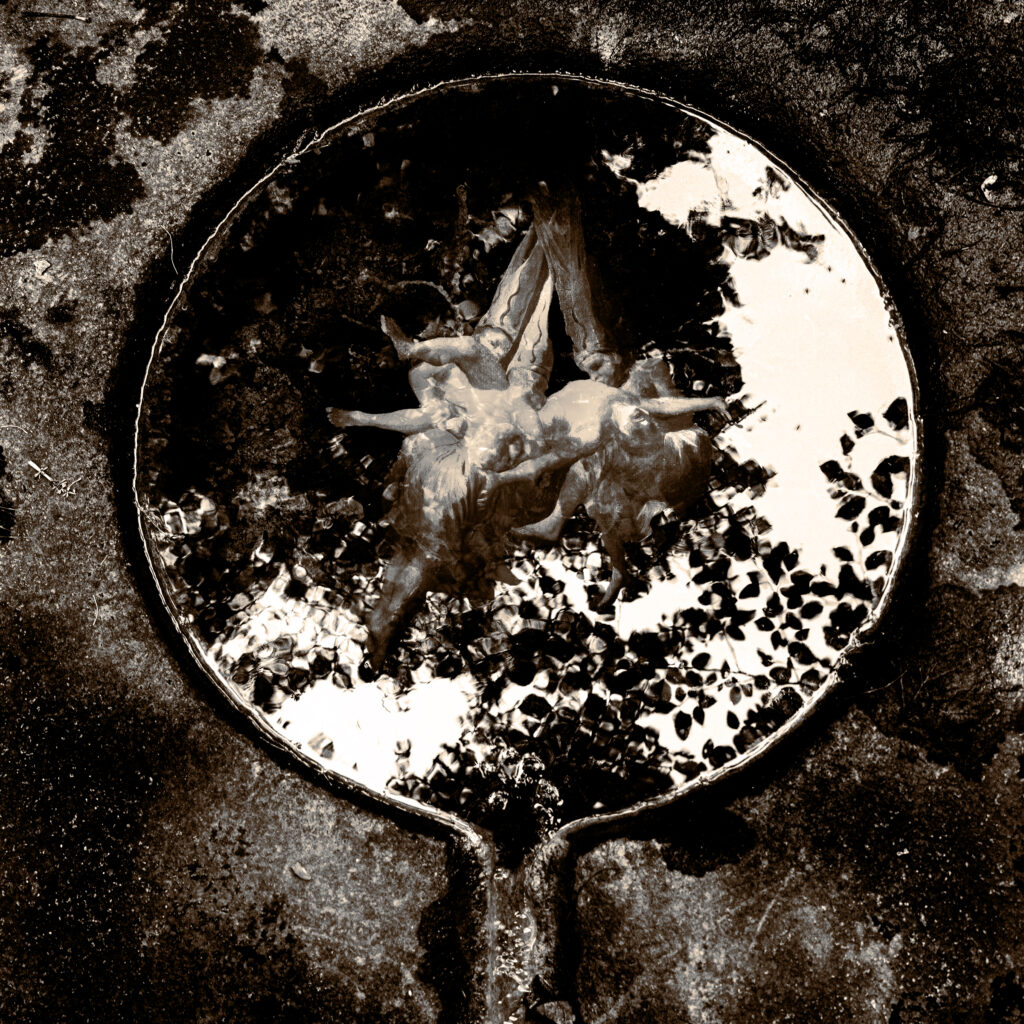 Today we release the new Sataray offering for you to hear: Blood Trine Moon. We’ve seen this artist refine and grow for over a decade, and are so thrilled to present her most recent venture into the depths of a shimmering shadow world. Hear for yourself and order on Bandcamp today HERE. 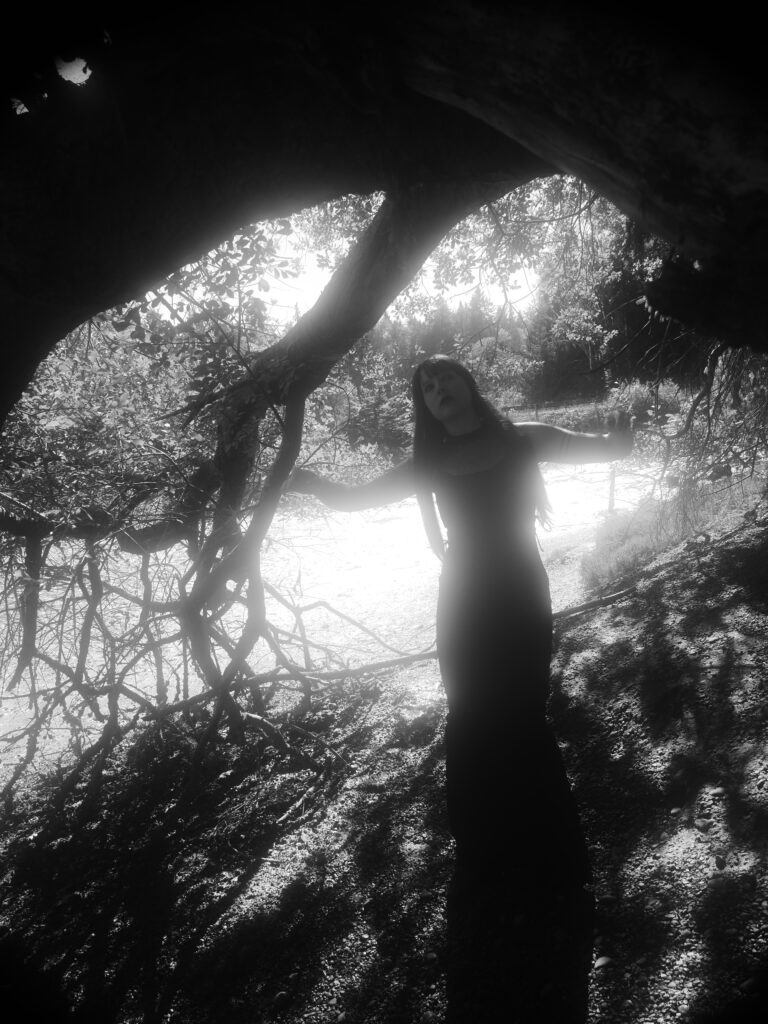 “Blood Trine Moon is a gloomy and gothic creation, as much a piece of music as a dark ritual. Ostensibly, it’s ambient music, but it feels as much aligned with Dead Can Dance as it does with Lustmord or the most spacious of Tangerine Dream material, and featuring elements of industrial and dungeon synth throughout. Autumnal music (and pretty spooky), but perfect enough for the snow-drenched winter we’ve been having as well.” – Treble

“This four-track collection is immersive in a way that it acts like a ghost within your body, guiding you and helping you achieve visions you didn’t know were possible. Sataray titled this EP metaphorically to describe her creative process of bleeding and reflecting, and it impacts the music in such a haunting and gorgeous way that it is impossible not to be overcome from endless chills down your spine. It’s impossible to describe with words, but that’s why we’re here, so let’s try…” 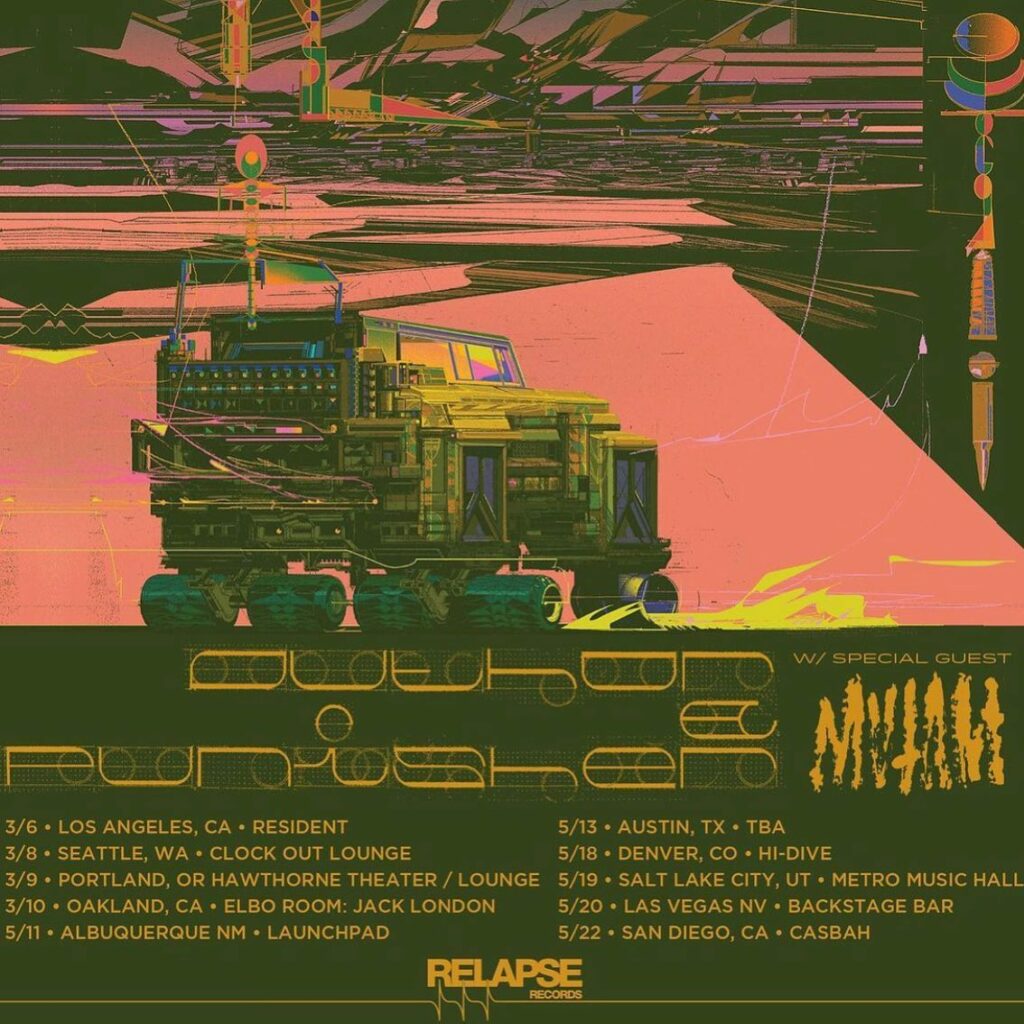 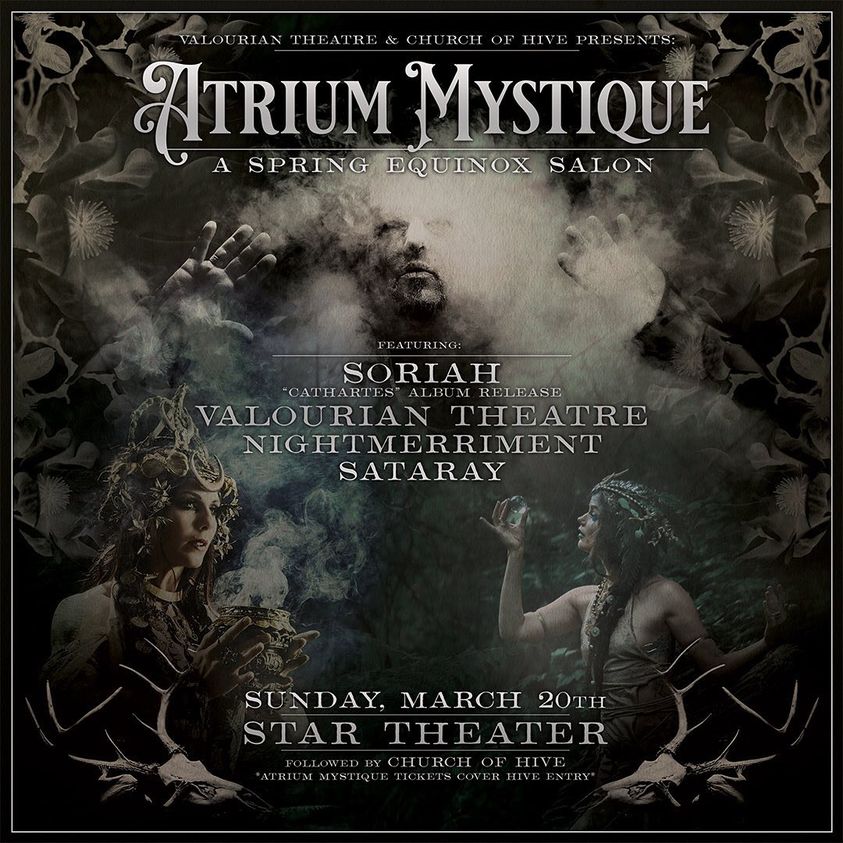 ~ATRIUM MYSTIQUE~
A Spring Equinox Salon
Valôurian Theatre & Church of Hive PDX are thrilled to announce our very first Spring Equinox Salon at the historic Star Theater.
Starring:
SORIAH with the new Cathartes Album release
VALOURIAN THEATRE with Dancers:
Tiare Valouria
Sol’Aura Pearl
Rachel Smith
Autumn Sage KaliMah
& Paige Roselene
NIGHTMERRIMENT Puppet Theater
With Special Guest:
SATARAY (Olympia WA)
Join us for an evening of transcendental live music, mystical storytelling and Ritual Theatre followed by a Darkwave dance party for the Spring Equinox proper!
Limited guaranteed seating is available & VIP seating comes with extra special, magical goodies!
Sunday, March 20th
STAR THEATER
Followed by Church of HIVE
Atrium Mystique tickets cover HIVE entry
Doors: 7pm Show: 8pm 21+
11pm: HIVE Goth-Industrial-Darkwave
Tickets Available at startheaterportland.com
Link: https://www.ticketweb.com/…/atrium-mystique…/11769365
GA $22 Adv, $33 At The Door
GUARANTEED SEATING $33 Adv (limited availability)
VIP BALCONY SEATING $66
(Includes VIP magical gift baskets)
Vaccinated Policy for Patrons:
All patrons must provide proof of vaccination (vaccination card or photo ID of it) or a negative COVID-19 test within 48 hours of the event.
Atrium Mystique is an all-inclusive event and welcomes any and all to join in the celebration of the season, music and the arts!
We look forward to basking in the magic with you as the wheel of the year turns and the budding of spring beckons us to revelry! 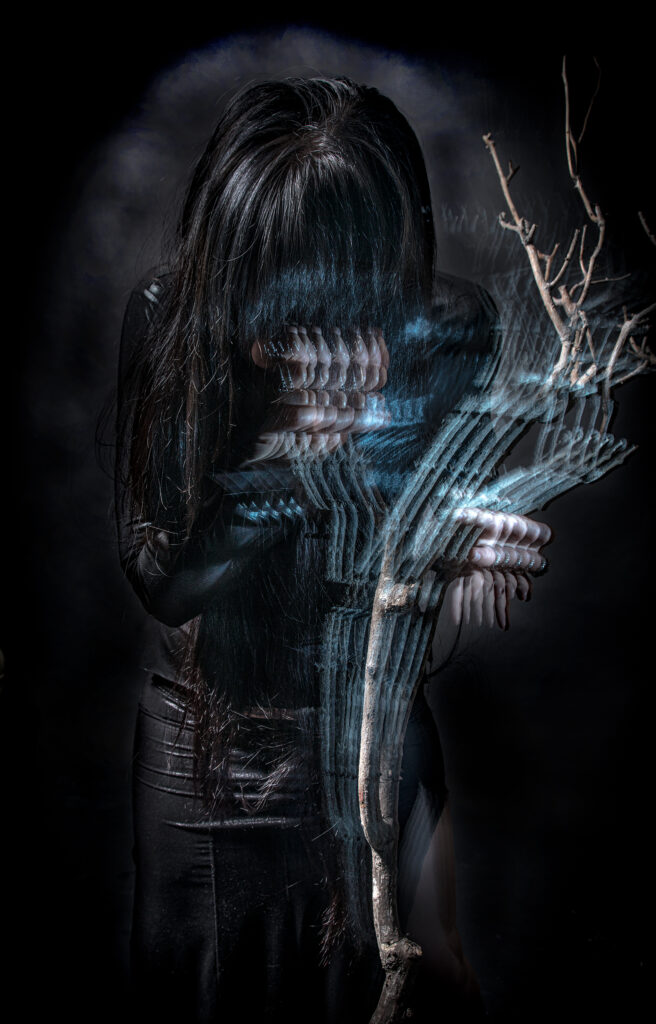 One-woman dark ambient project Sataray has been composing, performing, and recording her own music entirely, focusing intently on a specific sound. Sataray will release her Blood Trine Moon EP on February 11 through Scry Recordings.

Listen to “The Lake” below:

In her live show, Sataray displays create a ritualistic space and atmosphere, often including performance art elements such as butoh dance and other movement inspiration.

Metaphorically titled for the creative process, that of bleeding and reflecting, Blood Trine Moon is a vessel of contained rituals, exploring varied states of consciousness within occult explorations of the natural world. The EP intones rich, dark, ambient textures and further explorations into various vocal caverns. Elements of dungeon synth and harsh industrial genres blend seamlessly into this complex four-track EP.

On the release of “The Lake,” Sataray states:

“This track explores the desire to soothe the ferocity of one’s inner landscape through the energy of a deep, dark body of water.”