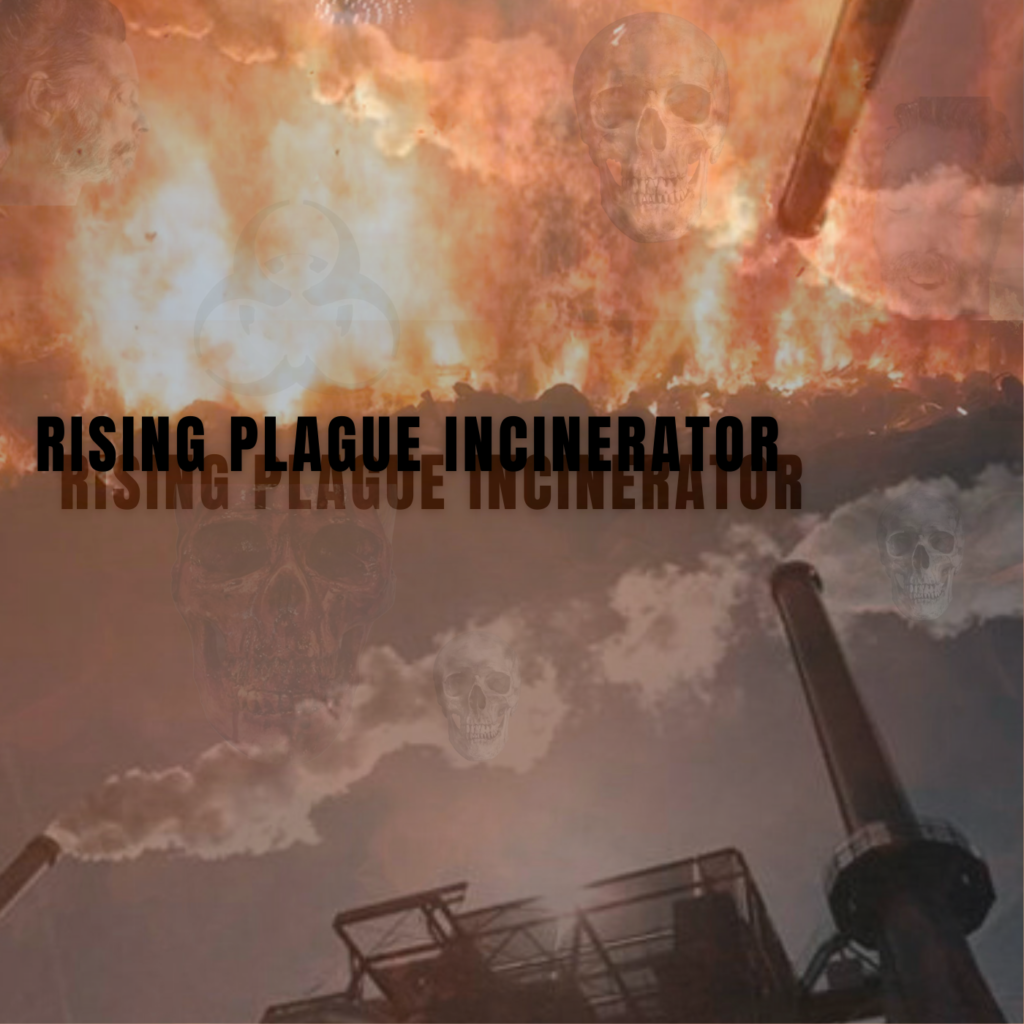 Rising Plague Incinerator is an immersive conceptual music project created by A.D. Carter (of the death industrial act Pathogens) utilizing synthesizers, electric guitar, drum machine, samples, effects pedals, hardware, metal, & power tools. Recorded at Minecrawl studios between October 2020 – January 2021, mastered by MS Waldron.
“At night, even at a distance, the low emanating drone of the Rising Plague Incinerators can be heard in still lifeless towns and cities with no heartbeat. There, they loom high, transmitting their ominous presence through dead black air. Standing tall, they won’t let us forget our dead, the present dead, the future dead. In our future, no burial ground remains for the endless diseased. No burials exist, only grey ash forming a blanket to smother the horizon. In the stillness of a birdless sky, whirls of smoke rise, purposeless debris drifts off to nowhere, and the expired ascend to high heaven, until silence reigns permanent. Rising Plague Incinerators are mechanical apparatus used to reduce infected bodies to ash to contain the spread of a virus. No burials, only burning.”

All proceeds from the sale of this single will go to the Black Lives Matter fund to help eradicate white supremacy and build local power to intervene in violence inflicted on Black communities by the state and vigilantes. 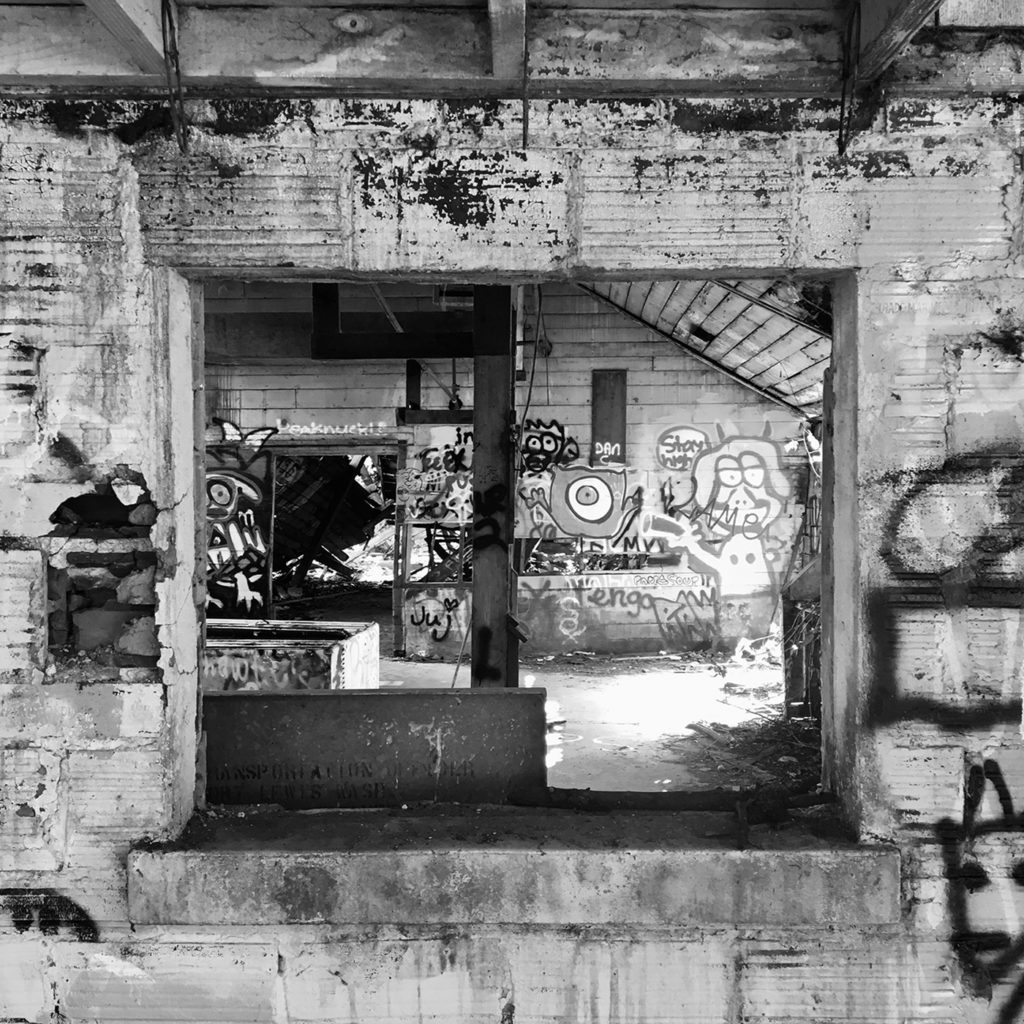 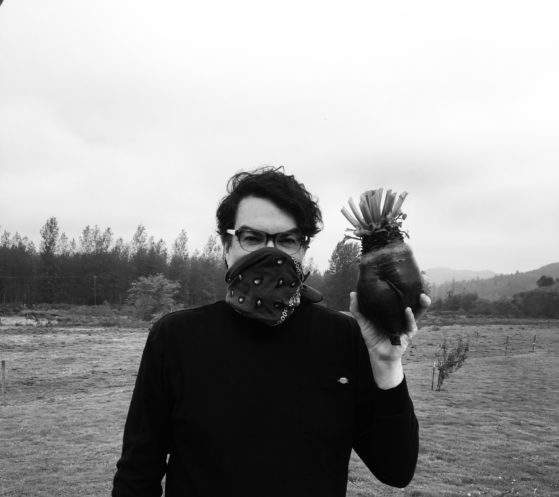 For well over fifteen years, Casey Chittenden Jones has been soundtracking the collapse of civilization under the moniker NOISEPOETNOBODY utilizing homemade instruments, synthesizers, field recordings, tape manipulation, and modular equipment to create haunting, discordant, and broken sounds to express the need for creativity in a dying ecosystem.

Notes Jones of his latest output, “Insanity Mirror is the result of a process that self-imposes limitations in order to create a reproducible form of sound collage, an exercise that was repeated multiple times over the course of several months. Each session begins with a single audio cassette – a copy of Fissure from Public Eyesore Records in San Francisco (2016) featuring the percussion work of Eveline Müller and homemade instrumentation from NOISEPOETNOBODY. The cassette is placed into a player that does not have a motor – all audio tape performance is done via manual wheel controller. Improvisations of cassette playback along with analog and digital audio manipulations create the foundation of sounds needed. That foundation track is then copied and reversed and then placed on top of itself like a mirror audio image. Edits from these recording sessions are then polished to create the finished examples of Insanity Mirror.”

In advance of the record’s release, Jones today unveils “Can’t See It Now,” describing it as, “abstract conversations about manipulations of perception and multi-directional audio reproduction.”

Insanity Mirror will be released digitally via Scry Recordings. Find preorders at THIS LOCATION.

Previously (and hopefully again soon), NOISEPOETNOBODY has spent much time performing in underground venues, bars, art galleries, abandon buildings, and illegal DIY spaces and forever seeking to promote mental deprogramming through anti-commercial sonic immersion, each NOISEPOETNOBODY set is a one-of-a-kind exchange of energy employing analog electronics and improvised inspirations via speaker cones. Jones has collaborated frequently with Butoh dance artists and released a 12” (The River) with choreography instructions composed by Vanessa Skantze. During the pandemic year, he has spent much time creating new work and expanding his techniques for production.

In related news, NOISEPOETNOBODY has composed soundtracks for three special Butoh dance videos by Briana Chittenden Jones featuring three different performers. Butoh is a form of Japanese dance theater that encompasses a diverse range of activities, techniques, and motivations for dance, performance, or movement. Briana Jones has been photographing the Seattle Butoh community for more than a decade. In light of a rapidly changing world, where live performances have come to a temporary standstill, Jones has turned toward video to capture the haunting beauty of Butoh while incorporating an intentional custom soundscape created by NOISEPOETNOBODY. View the first of the trio of videos HERE.